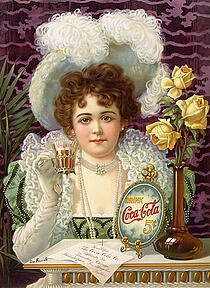 Shirley Biagi, wrote a textbook Media/Impact: An Introduction of Mass Media now in its 8th edition, that put Fowles list of appeals in her book.  At the time of Biagis 4th edition, Frank W. Baker took the list from her book and put it on the internet at http://www.frankwbaker.com/fowles.htm.  Bakers interest is in education and media literacy.

Now that you know how I got this information, I am going to pass it along to you in our discussion of advertising. I am going to stick with television advertising because I know that most of you watch that stuff. I will take Fowles list and show you how ads 30 + years later meet these appeals. Then I hope the next time you are being a couch potato you will think about the ads in terms of these appeals.

1. Need for sex- surprisingly, Fowles found that only 2 percent of the television ads, he surveyed used this appeal. It may be too blatant, he concluded, and often detracts from the product.

Youve come a long way, baby. These day sex sells. Today Fowles would conclude that sex had taken over. Just look at such blatant ads as those for erectile dysfunction, KY products, and Victorias Secrets. Other ads may not seem like they are ads selling a need for sex. We will look at some below that meet the need for sex as well as other needs.

2.Need for affiliation- the largest number of ads use this approach: you are looking for friendship? Advertisers can also use this negatively, to make you worry that you'll lose friends if you don't use a certain product.

Look at all the ads for smart or cell phones. You will quickly notice that with the new ones, you can not only call anyone who is carrying his or her own cell phone, but you can also Facebook, Tweet and, wait for it, even talk on the phone to anyone, anywhere. Kids need to have their own phones so they can text their friends covertly in class instead of paying attention to the boring old teacher.

3. Need to nurture- every time you see a puppy or a kitten or a child, the appeal is to your paternal or maternal instincts.

Oh those cute commercials with babies. It makes me almost wish I had one around so I can put it in cute diapers that might actually work. I did say almost. I also love the kitty litter ads. No, I am not smell deaf. I just love kitties. I have a friend who is actually toilet training her cat. Now thats a cross between kitties and kiddies that Im not so sure about.

In the next discussion we will consider the need to be aggressive as well as other more mundane needs. As very old radio and television programs used to say, Stay tuned. We will be right back after these messages. If you would like to share any thoughts on this subject, please put your comments in the box below.

Ann Mullen has been writing most of her life, some of it even for pay. She wrote as many as 3 columns a week in a newspaper in South Texas. For the last year she has been learning about websites, blogging and social media managing. Lately, Ann has been a team member of Broadvision Marketing.

If you need more help with your marketing needs, please feel free to give BroadVision Marketing and owner Jaco Grobbelaar an email or a call at jaco@broadvisionmarketing.com or 707.799.1238.